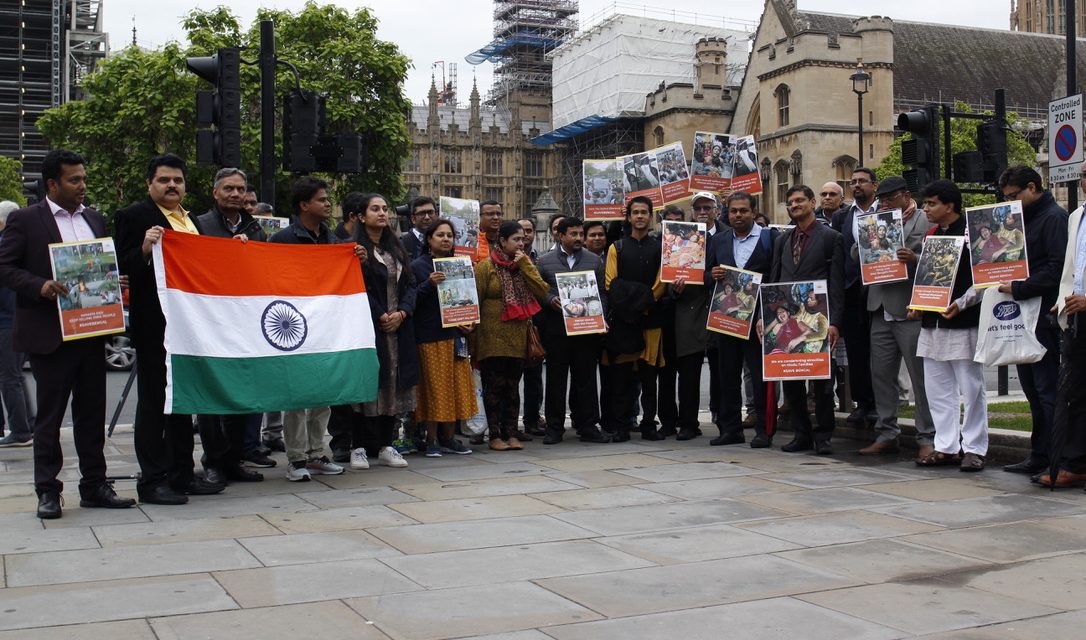 Bengalis came together on 19th June 2019 in front of the statue of Mahatma Gandhi in Parliament Square, in front of the British Parliament, even as it rained. They were joined by Indians from across the country. The reason? They were there to express their concerns and protest against the atrocities taking place in West Bengal. Several participants shared their views and the collective group urged the Central Govt to take cognisance of the brutalities inflicted upon common people, besides the political murders, kidnappings and ransacking of property in West Bengal. The atrocities have spread to different sections of the society like the students and more recently doctors!

You can read about this in the words of Ragasudha Vinjamuri of Asian Lite or view a news snippet by Haldia Live. A Times of India coverage-report is on its way! 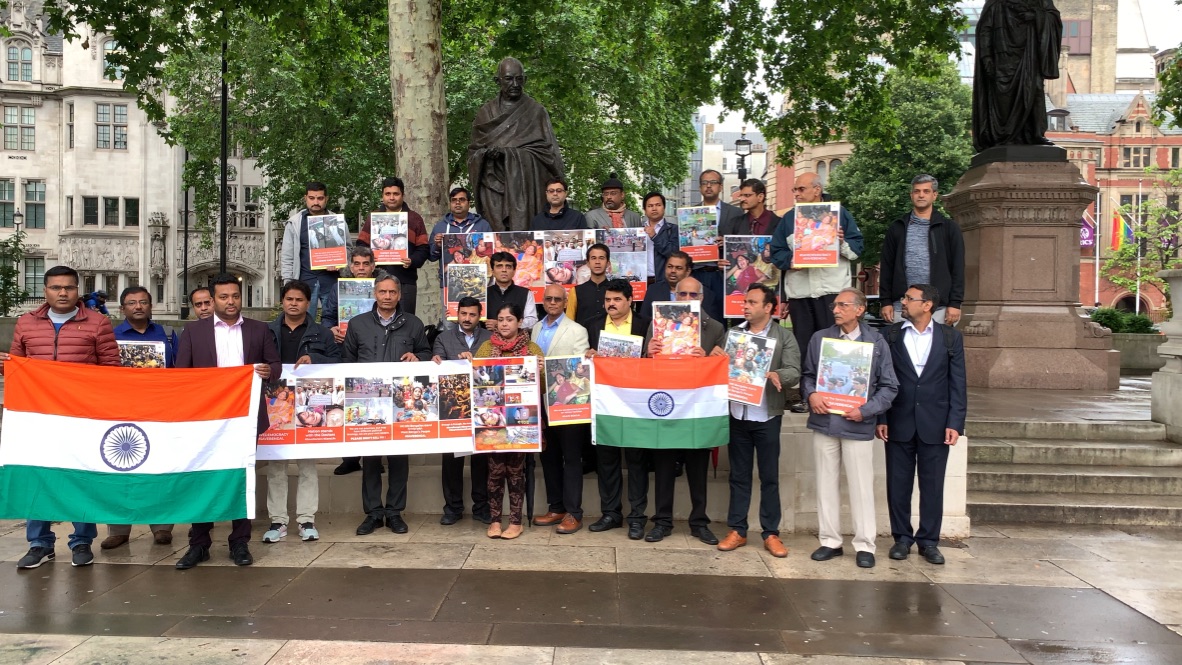 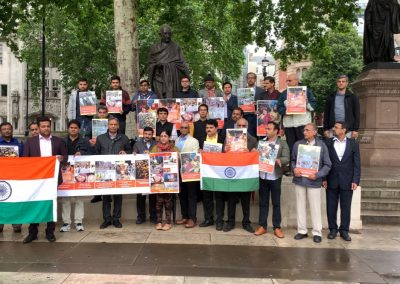 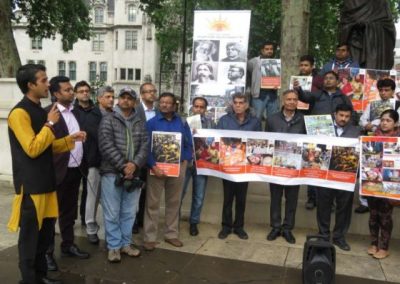 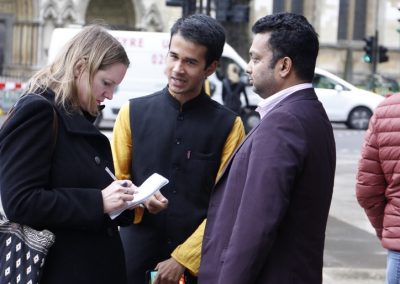 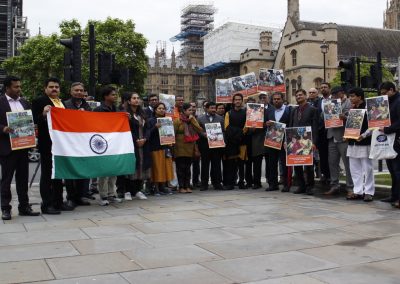 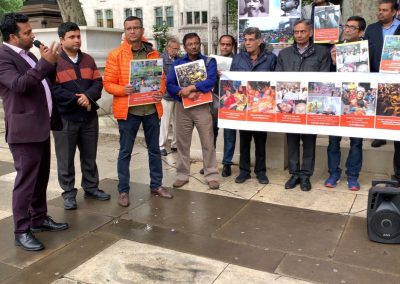 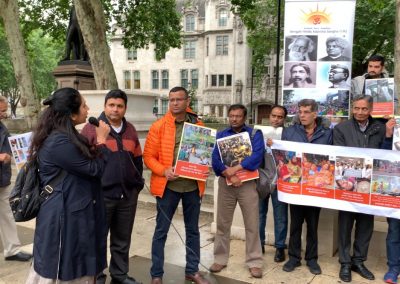 Speaking to the news outlets in attendance, as spokesperson for BHAS, I mentioned the following core idea behind the protests:

The objective of this march is to highlight the atrocious state of affairs in West Bengal, that the rule of law and democratic structures are being compromised, nay destroyed. Didigiri is running riot across the streets. Through this protest, we also wish to draw the attention of people, government, media and other stakeholders in India as well as abroad towards the crisis in West Bengal.  We hope that this leads to effective and timely intervention, both politically and socially, to resolve this severe problem. London is an important city in today’s geopolitical realities in the world, and we feel it can be a good place to broadcast our concerns from.

Bikram Banerjee of West Bengal said, “We believe in freedom and democratic values. We feel that whatever is happening in Bengal right now is not what our forefathers have fought for during independence movement. Though we are thousands of miles away from Calcutta, we feel our voice has influence. NRIs staying abroad can create perceptions. When we raise our concerns, it also creates confidence to the people on the ground there. We are addressing the diaspora here to contribute to a fund through which we can support legal and financial support to victims.” Also speaking on the occasion, Dev Mukherjee of West Bengal highlighted how his state, which was once the land of the Hare Krishna Movement and where once where Krittibasi Ramayan was fondly sung way back in 1220, has today fallen prey to radical forces. Udeshwar Singh of Bihar, Manu Khajuria of Jammu and Kashmir, Venkat Puli of Telangana, Saikat Chanda of Bangladesh, Shri More from Maharashtra, Manik Ghoshal and members representing Tamil Nadu, Karnataka and other organisations all expressed their concern and solidarity with the situation in West Bengal.

So, what has been happening in West Bengal that brought all these people to the streets of London to protest?

For one, the continuation of the use of violence in politics in West Bengal which had held sway under the CPI(M) government, which ruled the state for three decades. Reports from the Election Commission of India’s on past Lok Sabha elections, along with the annual reports of the National Crime Records Bureau (NCRB), show that the state has had a long history in poll-related violence. Reports of the NCRB reveal that between 1999 and 2016, West Bengal witnessed an average of 20 political murders every year! Upon the reports of violence in 1989 in the state, with 86 political workers dying in 1988-89, the then Prime Minister Rajiv Gandhi had said that “life has become unsafe in Bengal“.

Things have clearly not changed much!

In the 2019 General Elections, the Election Commission had to curtail campaigning by one day in nine Lok Sabha constituencies due to poll-related violence! In the run-up to the Panchayat elections in 2018, 50 individuals fell victim to such violence as well. In these elections, there was allegedly widespread intimidation of prospective candidates from the opposition parties who could not file their nominations, thereby leading to a number of uncontested victories for candidates of the Trinamool Congress. More recently, in the run-up and aftermath of the Lok Sabha elections, there have been a number of cases of violence.

Violence as a Political Tool

One of the most badly affected places in West Bengal lately has been the Basirhat subdivision (North 24 Parganas). There has been a pall of gloom in the Banigpara village under the Sandeshkhali I block. Political workers belonging to the Bharatiya Janata Party had been harmed, with one – Pradip Mondal, falling prey to the vicious ways of members of the Trinamool Congress (TMC), as per his wife Padma, who had earlier told The Indian Express [1]: “That was a trap set by local TMC men to attack my husband. As soon as he returned, the TMC men came, who on motorbikes, ransacked his shop. As my husband stepped out of the house, they opened fire at him. They chased him to the fields and shot him dead there.”

Pradip owned a hatchery and ran a garments shop. It is interesting to note the presence of a large BJP support base in the area, even though the Basirhat constituency was won by the Trinamool Congress. The BJP, however, received a lead of around 150 votes from booth number 56, as highlighted by Sandip Mondal, the brother of the deceased BJP leader. Another BJP supporter Sukanta Mondal was also killed in the violence. It is tragic that Sukanta was the only earning member of the family and supported his family by selling fish. As per local residents, the idea seemed to have been attack everyone in the area. However, the attacks were not only on BJP workers. Some 7 km away, in Rajbari Purbapara village, TMC worker Kaim Mollah was killed, when he was putting up some Trinamool party flags for a booth meeting, allegedly by BJP workers. He was first shot and then attacked by a sharp weapon. More recently, BJP worker Saraswati Das was killed, allegedly by TMC goons, in Basirhat.

In the Kinkinara area of the same district (24 Parganas), TMC workers Mohammed Mukhtar and Mohammed Halim were allegedly attacked by BJP members, though the state BJP leaders, particularly BJP MP of Barrackpore Lok Sabha constituency Arjun Singh, deny it, saying that their deaths occurred due to a family feud. In another section of the state, in Howrah district, the BJP claimed that its supporter Samatul Doloi was strangled to death by TMC workers for chanting ‘Jai Shri Ram’ in the Sarpota village under the Amta Police Station limits, while the police have confirmed the deaths but not released any statement on the cause of death. Further up north, in Coochbehar, 28 year old Ananda Pal, member of the Bharatiya Janata Yuva Morcha (BJYM) – the youth wing of the BJP, was killed in June 2019. This was one among many others, in the General Election season –  BJP worker Chandan Shaw was found murdered in Bhatpara in Barrackpore constituency, days after 22-year-old BJP worker was shot dead allegedly by the cadre of the ruling Trainamool Congress in Chakdah.

The troubling bit is that the state government seems to have been misreporting these incidences. According to a recent report by the Hindu [2], the National Crime Records Bureau (NCRB) has cited only one of the 36 incidents of political murders reported, as per the Ministry of Home Affairs (MHA) sources, in West Bengal in 2016.  The advisory sent by the MHA to the state government states that 36 lives were lost in incidents of political violence in 2016 while 26, 96 and 25 lives were lost in 2019, 2018 and 2017 respectively. It is interesting to note that while the NCRB depends on state-government for its data, the MHA has multiple sources to compile reports of violence in the state. It seems like the state government may be under-reporting and under-representing the magnitude of the violence in the state. Among the reports of complicity of the state government and selecting curbing of the activities of the opposition parties, this is the most troubling of instances of political interference.

The agitation and silent protest in London was not as much to side or chide any particular party, even though the Trinamool Congress should do better to curb violence in the state, with its state government in power. However, it has been a bigger problem over the last few decades. The problem of the political culture of the state. A culture of violence for political gains. There is an easy recourse to violence and local clout to get ahead among the grassroot workers, which is troubling. One needs to move away from this politics of violence. West Bengal needs to move towards a more inclusive and progressive politics, which focuses on creating jobs and creating the environment for sustainable development and investments. Businesses, doctors, academics, media-houses, and social and political workers need to be protected from the local Dadas. Goondaism has to go. And Didi has to take the onus of doing so, and as they say: charity begins at home. She has to remove the violent elements in her party. As the chief minister of the state and not just the leader of the TMC, she has a greater responsibility to the people of West Bengal. In the same breath as asking the BJP and INC and Left parties to restrain such elements, it is Didi who has to show the way.

Until that is done, we may have heard of Dadagiri in various parts of the country, but I hope that Didigiri will not run roughshod over the state, unchecked. 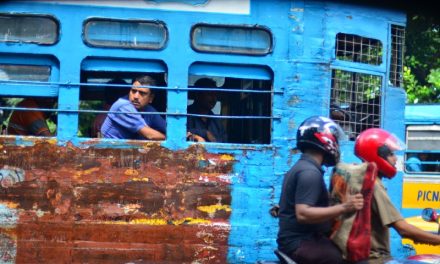 The Influence of Languages in Contemporary Bengal Politics 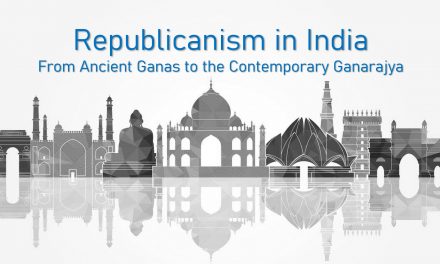 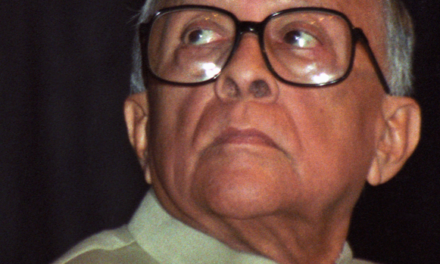 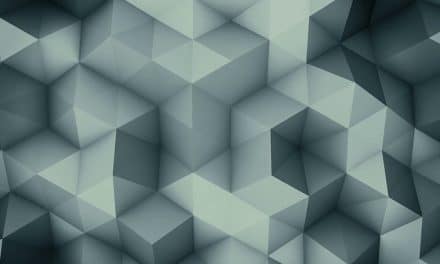